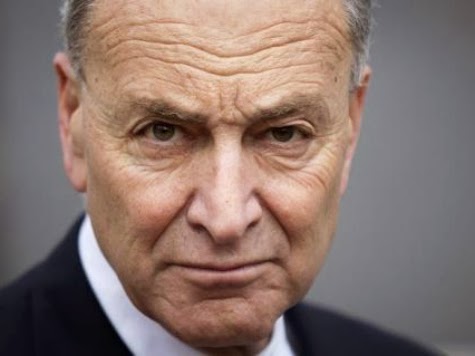 Invoking all the usual liberal cliches about conservatives, Schumer said the Tea Party is successor to “the Know-Nothings, Prohibitionists, Father Coughlin, and Huey Long.” In other words, he believes the movement is a collection of hicks, yahoos, neo-Luddites, fascists, male chauvinists, and racists fearful of what leftist academics might call The Other.

“Tea Party adherents see an America that’s not reflective of themselves, and the America they have known, and they just don’t like it.” They are bothered by changes in the “cultural, technological, and demographic makeup” of the nation. It angers them that “white Anglo-Saxon men are exclusively not running the country anymore.”

Schumer said his fellow Democrats in the U.S. Senate plan to subject the public to a massive, presumably very boring post-constitutional civics lesson from now until the congressional elections in November.

Democrats “must stop playing defense and go on offense when it comes to the need for government,” Schumer said as public support for ObamaCare hit a new record low. “We must state loudly and repeatedly we believe government is often a necessary force for good.”

As unemployment persists and the economy continues sputtering along, Democrats will focus on highlighting examples of popular government programs and show how “government can help the average family.”

This will help, in his view, to drive a wedge between rank-and-file Tea Party supporters and “elites” because while “Tea Party leaders have convinced Tea Party grassroots and many other Americans that government in the abstract is bad or even evil, they have not been able to dissuade them from liking specific government programs.”
Democrats need to get aggressive in spreading their expensive, utopian ideals among the electorate, he argued.
Since the days of Ronald Reagan, Democrats “have been quiet, defensive, even ashamed of our views,” Schumer said. “Bill Clinton, for instance, clearly believed in an active government, loved new government policies and programs he could create and enact, but he felt compelled in 1996 to state that the era of big government is over.”

But now the public is ready to fall in love with huge, overweening government. Schumer rhapsodized as the U.S. national debt stood at $17.27 trillion and 72 percent of Americans expressed the belief that big government now poses a greater threat to America than big business or big labor, a record high since Gallup started asking the question a half century ago.

He called for U.S. corporate taxes, already among the highest in the world, to be increased by the closing of so-called tax loopholes. He called for fanning the flames of class warfare by raising the minimum wage and pushing the seemingly indestructible myth that women don’t receive equal pay.

He called for the overthrow of the First Amendment by overturning the Supreme Court’s Citizens United decision that he claimed the chronically underfunded Tea Party movement has used to secretly “funnel millions of undisclosed dollars into campaigns with ads that distort the truth and attack government.”

The IRS and other government agencies should join in the fight by doing things “administratively,” he said.
After making the laughable claim that the electoral system “has been rigged to favor Tea Party candidates in Republican primaries,” Schumer called for the system to be changed so Tea Party-backed candidates can’t win elections.

“A way to lessen the grip of the Tea Party on the electoral process would be to do what a handful of states have done and have a primary where all voters, members of every party, can vote and the top two vote-getters” enter a runoff, he said.

On the positive side, Schumer implicitly admitted he is terrified of the Tea Party and the perhaps existential threat it presents to the hardcore Left that now maintains a death grip over an increasingly imperial White House and the do-nothing U.S. Senate. He wondered aloud

Why does the Tea Party, a group that seems to represent a small but extreme part of America, have such an undue power which all too often results in a stranglehold over our politics and policies? Ever since its rise in 2009, the Tea Party’s influence has been undeniable. They’ve won elections, stymied Democratic priorities and taken a sledgehammer to programs that are important to tens of millions of Americans. The sledgehammer approach has had a devastating effect on domestic investments like scientific research, education, infrastructure. And even with the cuts that were restored by the Murray-Ryan budget agreement, we’re still spending less on these crucial programs than we were before the Tea Party’s advent.

Before an audience at the Washington, D.C.- based Center for American Progress Action Fund, one of those shady 501c4 nonprofits about which the Left incessantly complains, Schumer mouthed Media Matters-style talking points. (Schumer recycled much of the content from his speech at the Iowa Democratic Party’s annual Jefferson Jackson Dinner on Nov. 2, leaving out his cheerleading for Hillary Clinton’s possible presidential run and his incessant, fear-driven mockery of Sen. Ted Cruz.)

Ignoring the near-absolute left-wing domination of the news media and the cavernous pockets of radical plutocrats like George Soros, Schumer attributed the Tea Party’s rise to

…the capacity of a select few we know all too well to quickly spend millions of dollars on 501c4s, the ability of legislatures to gerrymander with reckless abandon, the power of a message machine led by Fox News, the Drudge Report, and the Rush Limbaughs that can broadcast the same exaggerated and even false messages instantaneously are all means that the Tea Party has used to gain ascendancy.

Demonstrating his ignorance of how the Tea Party actually operates, Schumer insisted that somewhere in a smoke-filled back room a plot was hatched that allowed this thing born in 2009 called the Tea Party to gain political power.

“It was an ingenious plan,” he said. Those who devised it came up with “a superficial but very believable theory with an easy scapegoat: those Washington politicians and bureaucrats who created all this government to benefit themselves are to blame for all of your ills and anxieties.”

According to Schumer’s conspiracy theory, this plan allowed the Tea Party, and not opportunistic leftist politicians, “to fill the vacuum and capture the anger that was bubbling in the land.”

“Democrats and most of America didn’t respond forcefully to their argument,” he said. This failure to respond let the Tea Party’s ideas “take deep hold, virtually unanswered.”

The Tea Party elites — with little rebuttal — have been able to make “government ” the boogeyman. They have convinced too much of America that government is the explanation for their all ills. Even though most Americans and even most Tea Party adherents like much of what the government does, the Tea Party elites proclaim that everything that is wrong, even non-economic and private sector problems, can be blamed on the government.
Their mantra “dramatically shrink government and our problems will end” is the fundamentally false, but not effectively challenged premise, that is the core weakness of the Tea Party, and one we can exploit to turn American politics around to the benefit of our nation.

First, the Tea Party does not have “elites.” Unlike the neo-Marxist ideology that dominates the Democratic Party, it is by its nature anti-elite.

Although Tea Party supporters are hardly tofu-munching anarchists, the Tea Party itself is an inherently non-hierarchical movement. It has no formal leadership. It was not designed. It came into being because despite the long march of statism and the siren song of redistributionism, there has always been a deep-seated, residual distrust of government in the American character. Americans don’t like being told what to do and the election of in-your-face leftist busybody Barack Hussein Obama in 2008 made Americans justifiably fear that the end of the republic was at hand.

The Tea Party is a patriotic, lawful rebellion against lawless post-constitutionalism and the out-of-control government that is crushing civil society and condemning the nation to eternal mediocrity. It exists not because an activist billionaire willed it into existence but because Americans will only put up with so much nonsense before they explode. It is driven by righteous popular indignation at governmental excesses and assaults on individual liberties, which could help to explain why conservative elitists like Charles Krauthammer find themselves unable to understand it.

The very idea of “Tea Party elites” is an oxymoron that could only spring from the mind of a partisan attack dog with a woefully superficial grasp of American politics and history. Although the Republican Party’s congressional leadership would love to neutralize the movement by co-opting it, no one commands the Tea Party.

Nor could they. As my colleague, Dr. Steven J. Allen, has written, the Tea Party is not a formal, traditional political organization.

Spontaneous and organic, it is decentralized and leaderless. It cannot be decapitated because it does not have a head. Even if significant players are taken out, its overall progress cannot be halted. It is driven by powerful, time-honored ideas about the proper role of government, not by personalities or demagogues. As Allen writes, it is more starfish than spider.

Cut off a spider’s head, and the spider dies. Cut off a spider’s limb, and you have a crippled spider or a dead spider. Unlike the spider, a starfish has no head. It has no brain; its intelligence is distributed throughout its nervous system. Major organs are replicated throughout each arm. Cut an arm off a starfish, and not only does the starfish survive, but the severed arm may grow into a new starfish.

The Tea Party will continue to thrive as long as Americans believe that they, not unaccountable bureaucrats and leftist meddlers like Schumer, control their own destiny.

Second, the Tea Party is not anti-government, as Schumer suggests. This is a tedious rhetorical straw man that left-wingers routinely use to smear those who don’t believe in unlimited government power. The implication is that wanting to scale back the food stamp program, for example, is somehow equivalent to placing a politician’s head on a pikestaff. Madness.

Tea Party enthusiasts aren’t anarchists. Like those who participated in the Boston Tea Party of 1773, they are complaining about the excesses of government. They believe that government needs to be restrained in order for America to flourish. They think that the Constitution is the best means of restraining it.

Third, no one in the Tea Party outside of LewRockwell.com perhaps, a fringe libertarian website whose writers would overthrow the Constitution in order to return to the Articles of Confederation, believes that all problems in the nation would disappear if government were rolled back. This is another dishonest left-wing use of a rhetorical device.

Only in Schumer’s dreams do Tea Party backers make such an absurd claim. It’s not the all-or-nothing proposition that he contends. Perhaps this alleged “core weakness of the Tea Party” has not been “effectively challenged” because it’s not an actual “premise” that anyone accepts.

If Schumer wants to try to “exploit” this “core weakness,” let him go right ahead. He’ll be participating in a one-person debate.